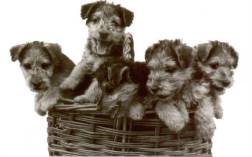 Profile of the Lakeland terrier

The breed originated in the Lake District fell packs, working dogs whose job was to go to ground after foxes. By 1910 people were talking about the "new improved

Fell Terrier" and in 1912 the name Lakeland Terrier was agreed upon. At first they were shown only at local agricultural events outside of Kennel Club regulation.

The Lakeland Terrier Association (now defunct) was founded in 1921 and regulated the breed. Members were split on whether K.C. recognition was desirable or not.

In 1928 a majority was obtained in favour of application for K.C. classification and the breed was scheduled at the K.C. show of that year. Championship status was

achieved in 1931. The Lakeland Terrier Club was founded in 1932 and promoted the breed nationally, sponsoring and guaranteeing classes at Championship shows.

Progress was good until World War II severely curtailed dog breeding. When shows started up again after the war the breed improved rapidly and by 1950 Lakelands

were winning at the highest level.

Most breeders who are members of the Lakeland Terrier Club breed primarily for a show dog, retaining a few of the very best for showing and breeding.

As the average litter size is about 3.5 there is a fairly small surplus, of well bred puppies, available for pet homes.

Robust, hardy and healthy, good with people and children, in many ways they make the ideal family pet - though not all will live harmoniously with another dog of the

same sex, especially a Terrier of similar temperament. They respond well to consistent, patient training and attention. Bad habits once learnt are difficult to change, never

encourage a puppy to do things that will not be acceptable when adult.

Though relatively small they are active dogs that love to race round, run and play with a ball. Owner's gardens or runs need to be well fenced as Lakelands were bred to

squeeze through small openings. They can walk all day, but are adaptable and if the weather is bad will be content to sit at the fireside (or preferably, if allowed, on the

owner's lap.) "Gay fearless demeanour" "on the tiptoe of expectation" - Lakelands can sometimes tremble with the sheer excitement of life - this is known as

"Terrier dither" and is not a sign of nervousness. They become less exuberant as they get older.

Smart dogs with very sound "workman like" conformation, they are

not exaggerated in any way. Size varies somewhat, most are between

Most Lakelands are variants of the Black and Tan saddle pattern, ranging from mostly Black to almost all Light Tan. Those with a mixture of Black and Tan on the back are referred to as Grizzle. The other main colour is Solid Red,

which is also very variable, ranging from quite dark to very light - the lighter ones are referred to as Wheaten. Very occasionally Liver (Chocolate) and Tan ones are produced. Solid black was lost in Britain but continues to be line bred

in Scandinavia, recently some have been reintroduced into the UK.

The hair is not shed and Lakelands require regular grooming and trimming.

The coat is double, consisting of a harsh topcoat with a soft undercoat.

Show dogs are always hand trimmed, raking out much of the undercoat on

the body and shaping the furnishings on the face, legs and underbelly –

much work goes into preparing a coat for the show ring. Pet dogs need regular

texture which many pet owners seem to prefer.

Breeders are expected to adhere to the Club's Code of Ethics

Breeders listed below are members of the Lakeland Terrier Club
who supported the 2019-2020 Yearbook with an advertisement: